So I'm about to start posting my travel diary posts. I should mention from the start, I largely write these for me, so I can look back and remember. But I'm posting because others might be interested as well. I'm also going to discuss a bunch of the ethical issues we encountered. Given LJ's ability for spam these days, i'll leave these posts unlocked for a week or two, then friends lock them all.

Day 2 began with meeting our driver and a guide, again part of the package. We started with a guided tour of Angkor Wat. Angkor Wat is the big one, it’s the main temple, one of the largest and in the best condition. It was built in the 12th Century as a monument to Vishnu and to the King. However, as Buddhism rose to prominence, much of the Hindu iconography has been adapted to suit Buddha. The temples are all in the same basic design. Square walled compounds, often with a moat, and gates and causeways in the four cardinal directions. The number of towers and levels vary, but the higher the tower, the closer to god. Angkor Wat has nine towers. Apparently even numbers are unlucky. They also have separate buildings called libraries, I think I liked these structures the best. 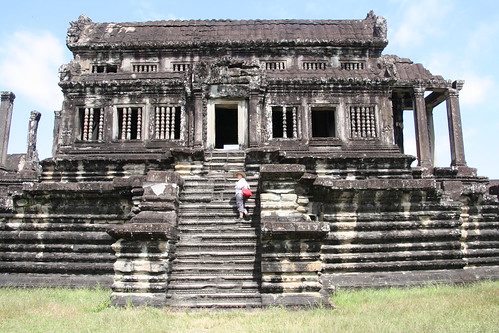 This morning our alarm was set for 4am. At 4:30am we were in a car heading out to Angkor Wat to watch the sun rise along with hundreds of other tourists.

This is supposed something that rocks up on all those 'top 100 things you should do before you die' lists.

Holding a torch we stumbled through the dark into the Angkor complex and staked out a seat on one of the library steps. Most of the crowd clustered around the edge of the ponds. The predawn light was magnificent. The towers of Angkor framed against the sky. 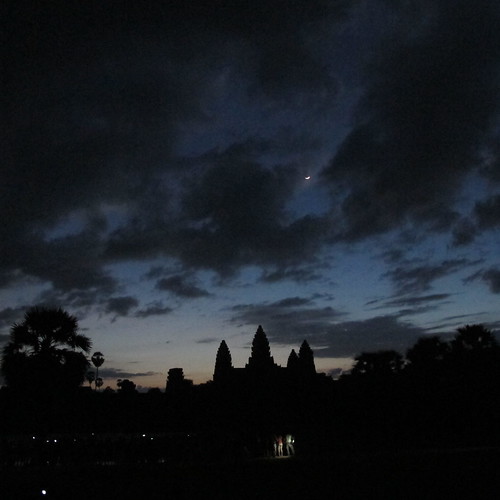 There was a group called Grasshopper Adventures that does a range of cycling tours throughout Asia. I can't say enough good things about these people, we ended up doing three tours with them and would happily do more. We decided to start with an easy one to see what we thought and if their bikes were any good. We opted for a 25km kilometre ‘country village ride’. This was an easy ride that saw us leave Siem Reap and cycle around some nearby villages.

This was my favourite of all the days I spent in Cambodia. Certainly the tour I enjoyed the most of my whole adventure. The tour was a 75km ride out of Siem Reap to Beng Melea, a temple out in the jungle that is not part of the Angkor Complex and not protected by the UNESCO world heritage listing. This tour was also run by Grasshopper Adventures.

I guess there are only so many temples you can visit, although there were many we didn't find time to see. On Day 6 we opted to visit Tonle Sap. Tonle Sap is the biggest lake in Cambodia, this is a huge lake that numerous rivers run into and the size of the lake varies greatly between wet and dry season. Lonely Planet recommended the Tonle Sap floating villages in the top 5 things to do in Siem Reap and Nat also endorsed the idea.