When we first moved in here - I hired a couple of guys to pull down the asbestos shed. We got into a discussion about stray kittens and rehoming strays and how feeding strays is just perpetuating the problem because then they kill native wildlife and carry disease.

You know - the whole rant about the environment and responsible pet ownership and why you should get your pets vaccinated and desexed and all that jazz.

The tradie told me about a stray cat they have that hangs around the yard at work and kills rats and all - so they feed it because its useful. I gave him a bit of a lecture about how Lort Smith does cheap desexing and how he could get the cat desexed and not have to worry about kittens every six months or so. He also listened to a preachy lecture about vaccination.

He just rang back today to tell us that his stray cat got hit by a car last week and died and how they have just discovered a young litter of kittens from her. He wanted to know what he should do with the kittens and ask advice on where to take them and if they want to keep one where to get it desexed and vaccinated. They are going to take the kittens to a shelter and keep one or two, getting it desexed and vaccinated to be a mouser in the work shed/yard.

You talk the talk about responsible pet ownership and being good environmental citizens but it generally feels like either preaching to the choir or people are being polite but not really listening.

I'm happy to know my little chat about stray cats while they were taking down my shed was listened to and attitudes have changed and they are now acting accordingly.

This is a good thing.

The kittens I took to the shelter were too old and too feral - I doubt they got rehomed - but its good to know that this set of kittens will get a second chance because of my example and words.

So I decided I really didn't like the changes to Firefox with the last upgrade and so swapped to Safari.

However I've decided Safari sucks even more - its incredibly slow, and it crashes a lot - especially when I try to use websites that I use daily for work - like my bank website, google maps and ACHRIS - which is the online AAV databases.

So - either I go back to firefox or I try something else.

First person to suggest IE gets slapped. Yes - I am using a Mac and getting a new computer isn't on the cards for some time yet.

What do you use and why is it the best?

Google maps seems to be well broken today. I'm getting my directions - but only a map of the US.

I use google maps all the time as a work tool. This is being frustrating. Is anyone else having the same problem? I'm using Safari on a Mac.

EDIT: It started working again - obviously I should be more patient...

I'd like to think that my kittens love me which is the reason they are all sitting in a puddle around the base of my desk chair and my feet, but really I think its because I have the heater on and pointing at me.

Jumble and Corsair are getting on better these days - whether Jumble has decided to tolerate the kitten or its competition for the best seat in front of the heater I'm not sure, but there has been lots of interactive grooming sessions in front of the heater that haven't all degenerated into head eating. I think Magellan is feeling a little left out, he doesn't get to snuggle with the other two, but generally retreats to my lap - so its not all bad.

There is a dude making lots of noise underneath my house installing ducted heating as house that was purchased with ducted heating did not seem to actually have working ducted heating - the unit is dead so we are getting it replaced. I really wish there was some kind of recourse or rules that meant houses in Victoria must come as advertised and things like building, pest and electrical inspections were a mandatory part of selling a house. The vendor should get these reports done prior to sale and make them available to the interested parties and the cost of the report can be passed on in the sale price of the house.

Anyway - the heater installation dude tells horror stories about kittens getting caught in heater ducts. He also talks about getting ducts cleaned and how its basically a scam. Getting the ducts cleaned regularly degrades the quality of the ducts, so they disintegrate faster - many older ducts also are made from fibreglass- so cleaning can mean the next time you turn on your heater your house fills with tiny fibreglass fragments. So all those advurts that say asthmatics will die if you don't get your ducts cleans and photos of rats in big ducts are just scare advertising. You don't get the big ducts in residential houses, just commercial systems. The dusty smell you can sometimes smell when you turn on your system is the dust near the intake vent being burnt - and you should regularly clean/dust around your intake vent - but that is about it for cleaning.

But tonight I shall have ducted heating and be able to turn off the little radiator and the kittens will go sit on ducts rather than on my feet in front of the heater.

It is cold, really cold, and our new house has fail heating. I have gotten two quotes for a new heating system and getting a third tomorrow. Then ordering a new heater.

In the mean time - we've resorted to wearing gloves, hats and scarves inside, snuggling down under blankets to work and cooking lots of food in the oven so it warms up the house some.

Last night curled up on the couch with Rabbit watching Sons of Anarchy I had three cats on me, all serving as good little hot water bottles. Then Megan fetched the radiator heater and put it on in front of us. All three cats promptly relocated in front of the heater showing their true allegiances.

Today the heater is back in my office and here is a rare photo of Corsair in her natural habitat! 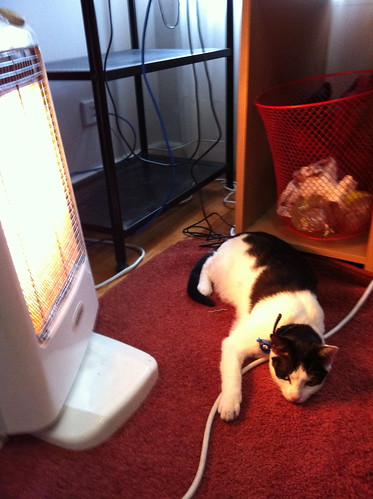 Since moving to Fawkner I've been a bit skeptical about the lack of interesting take away shops and the lack of a pub. While getting a heating system quote today we got talking to the salesman who also runs a live music venue right next door to the heater place. He obviously tagged me and Bear and started pimping his other business and even showed us through the venue.

Eclectic mix of music - decent range of beers - shall have to check it out sometime.

Early this week I was doing fieldwork in the Wallaby Creek Catchment Area, its part of the Kinglake National Park, but also closed to the public so it was quite a privilege to be able to explore.

Despite being two years on from the Black Saturday fires, the impact and presence of the fires is still very obvious - both in talking to the Parks Vic staff who lost team members and their houses and office, but also in the forest. 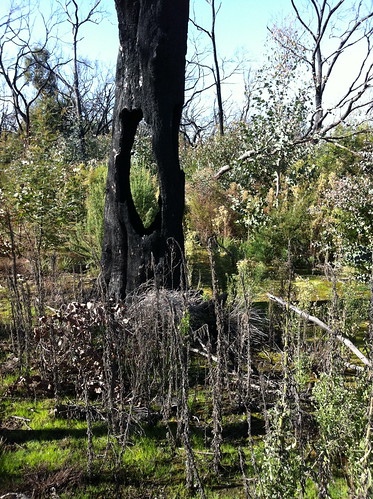 This is a photo of the forest of Mountain Ash, these trees are dead, beyond hope of regrowth and are waiting to be logged before they fall down, tall mountain giants with a new forest of incredible dense undergrowth growing at its feet. 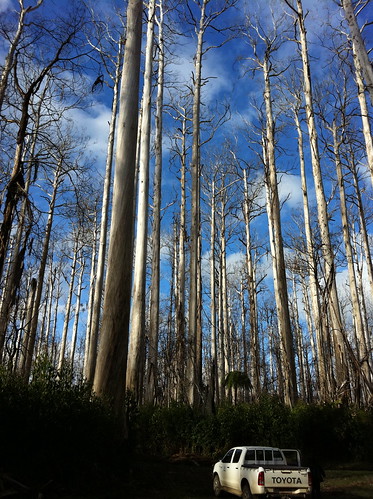 Okay - Firefox has finally gotten to the two crap stage. Is there an easy way to move bookmarks and vieiwing history from firefox to safari? Cos I went googling and none of the solutions I found worked.

Today at work I got to play with a baby wallaby. Work consisted of driving and hiking around the Wallaby Creek Catchment Area recording archaeological sites as part of an ongoing bushfire recovery project.

I love my work. 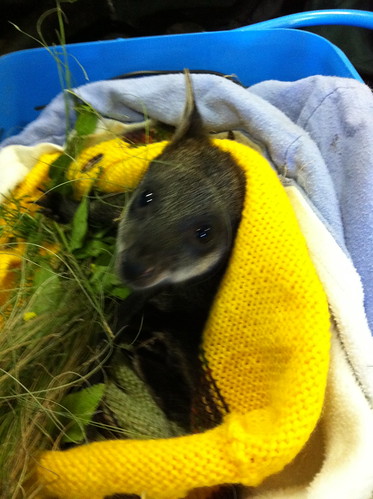 Catflap is installed - found a good glazier recommended by Amber who specialises in catflap installations.

He also donates a token amount to the RSPCA for each catflap install he does. Not the cheapest quote of the three I got, but he also came out within half a day of me calling to do the installation - the cheapest mob needed 5 days to order the glass and then failed to show up and measure like they said they would. The guy also sold me a catflap - cheaper than the pet shop would.

So yes, if you need a catflap installed I can provide their contact details.

I've got another guy repairing the roof - lots of banging and clattering around on the roof but he seems quite a personable chap and I'm happy with the job he is doing.

My patience for tradies who don't return calls when they say they will is growing thin.

I still need to get a second quote on electrical work we want done - shall see if they show up tomorrow to give me a quote.

Does Carrot Cake count as a healthy and nutritious breakfast?

I had my first real good night's sleep in the new house last night, I am hoping this is a sign that I am getting used to the new house and its beginning to feel like home.

I'm trying to do this weird thing with bi-carb and vinegar on my hair, rather than use shampoo and conditioner and I shall let you know if it works.

Yesterday we had all the food and 3 whole cakes! Happy Birthday Em!

So most of my posts are about kittens these days aren't they. I was going to post a reflections on living in a new house post. But what I really want is a peg basket that isn't full of spiders when I go to hang the clothes on the line.

New house - yeah - new house is interesting. Easter break disappeared in a blur of unpacking, attempting to get quotes from tradies, doing various repairs around the house and hunting kittens. There was a bit of lovely catching up with friends as well.

My job is still organise tradies. Emily has established herself as the most useful member of the household for DIY repairs. Bear is mighty kitten hunter extraordinaire. 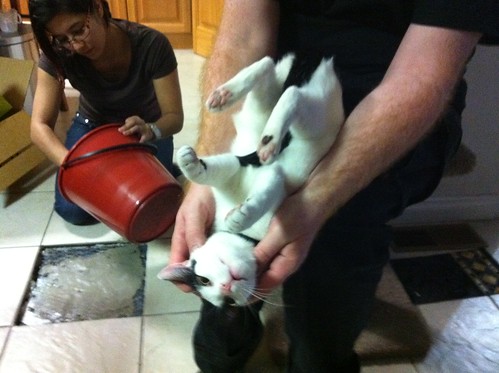 The kittens require re-training - new furniture means the line between which furniture they can jump on is blurred. Kittens aren't allowed on benches or tables, but are allowed on desks and chairs, having got a new dining table and coffee table has confused them. The water bottle is much in use. They are also rather frustrated by the fact that they are not allowed outside yet.

I am frustrated by the fact that glaziers seem to be incapable of returning phone calls and providing quotes. We need to get the cat flap put in a window. Of course while I bitch about them they chose this minute to reply with a quote.

Got a scary quote from a roofer - talking to two other roofers about repairs and hoping to see some cheaper quotes.

Now would be a good time to ask if anyone can recommend electricians, roofers etc?

We have a few items I'd like to sell cheap if anyone is in the market. A good fridge and a good washing machine if you know anyone who needs these items.

I also have a rather nice office works desk which could use a new home.

In the old house the fishtank was on the kitchen bench and didn't get the kittens attention.

In the new house its located near the TV and the kittens are fascinated. 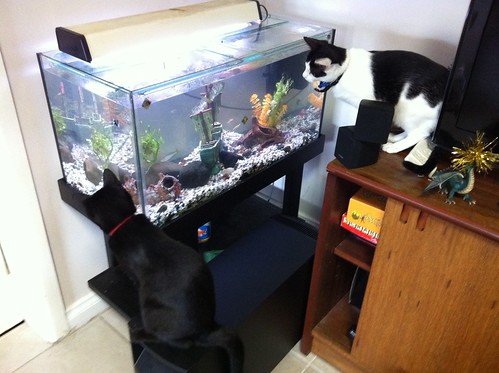 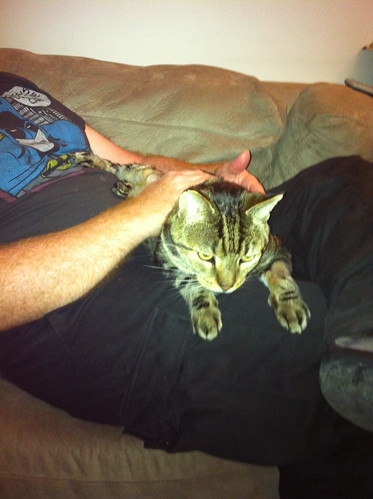